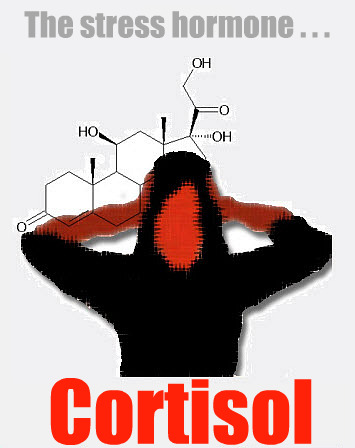 Cortisol is a hormone that is released due to stress. Whether it’s physically or mentally, cortisols primary function is to deal with anti-stress and anti-inflammatory. Your body needs cortisol to maintain processes during long periods of stress therefore it is needed and cannot be eliminated from the body.

So why has cortisol been deemed such a bad reputation? One of the roles of cortisol is to provide the body with an alternate form of energy when there isn’t enough glucose available. The process is known as gluconeogenesis which is the process in the liver that creates glucose from non-sugar sources to provide energy to parts of the body that need it. Basically the body breaks down muscle tissue for the amino acids which will then be used to create sugar.  This can happen with intense exercise especially in a fasted state when all glycogen levels are depleted.  Cortisol is also linked to the production of fat cells.  When levels of cortisol are readily elevated this results in fat storage. This fat storage is found around the organs known as visceral fat in animals.

So how can we combat this Gluconeogenesis?

Now how did they measure cortisol presence in each individual? Researchers measured the amino acid 3-methyl-histidine in urine as a marker for muscle breakdown which can be directly linked to the presence of cortisol. The end result showed the group that consumed carbohydrates during exercise had less cortisol present. This is due to the fact that the body didn’t need to generate its own sugar. Sugar was provided in their intra-workout drink, and when consumed, this added more sugar to the bloodstream of the individual.

There are supplements to take and decisions you could make on a daily basis to prevent higher concentrations of cortisol throughout your body.

Lack of sleep makes the body believe there is constant stress which will lead to release of cortisol in the bloodstream. Cortisol is also noted to be at its lowest during slow wave sleep (this is when your body’s growth hormone levels are at its highest).

A study was conducted comparing testosterone levels to cortisol levels with the intake of vitamin C. The end resulted showed the individuals consuming vitamin C daily, improved their testosterone to cortisol ratio. Vitamin C has immunostimulatory effects which it is highly notorious for. MEDIVIN by VPX Sports will take care of this with one simple pill!

Overtrained athletes show a direct correlation with excess cortisol and the depletion of L-Glutamine. Glutamine is great for recovery and also possesses many immunostimulatory effects as well.

Please log in again. The login page will open in a new tab. After logging in you can close it and return to this page.